Why are Salt-Based Softeners Being Banned?

Content: The Reasons Why California Led the Movement to Ban Salt Water Softeners

The most common type of traditional water softener treats hard water through a process called ion exchange. The water softener runs the water through resin beads where the calcium and magnesium molecules switch places with sodium molecules, leaving the water soft. In more basic terms, the softener removes the hardness minerals – calcium and magnesium – from the water and replaces them with sodium. The salt brine water (sodium and chloride) is then discharged down the drain, wasting up to 150 gallons a week. 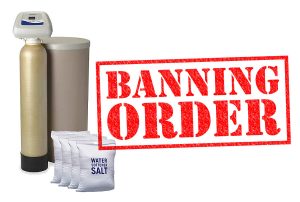 Sodium and Chloride are not Eco-Friendly

The discharge of salt brines from the regeneration of water softeners can have a negative impact on the quality of water in groundwater basins, recycled water, and wastewaters. Higher sodium and chloride content increases the treatment costs and reduces the potential reuse of wastewater for farming and industrial applications. It can also impede the ability of a wastewater treatment agency to comply with discharge standards related to total dissolved solids (TDS). TDS is a measure of the total concentration of dissolved minerals in water, with chloride being just one of them. The problem is that most wastewater treatment facilities do not remove measurable mineral concentrations from the waste stream, so they are passed on to the environment.

California declared chloride the biggest contaminate affecting water supplies, the nation, and the world. Because individual municipalities usually control water sources, some states, like California, choose not to enforce statewide bans. The California solution was the implementation of Assembly Bill 1366 in 2005, enabling local communities to ban these types of water softeners to meet environmental discharge standards. Typically, city councils convene on this issue – in some instances, allowing residents to vote by ballot on banning these softeners in their communities. Sometimes this civic action is sparked by the threat of fines for not meeting discharge standards, and in other cases, by protesting farmers whose crops are damaged by sodium discharge. In the California community of Discovery Bay, leaders took action after repeatedly facing state fines for the high salinity levels in the wastewater it was discharging. In January 2014, the governing board approved rules banning the new installation of water softeners that use sodium, or potassium and discharge the salt solution into sewer lines. As of August 2014, salt water softeners have been banned in 25 California communities.