What Do You Know About Ion Exchange?

While not generally considered a serious health risk, hard water can be a real nuisance, thanks to mineral buildup and its frustrating interaction with soap and other cleaning products. To eliminate this common problem, many people use salt-based water softeners, which “soften” water through a process called ion exchange. Unfortunately, these systems come with some pretty considerable drawbacks that are sending people in search of more modern alternatives.

What Is Hard Water?

As water pushes past deposits of chalk, calcium, dolomite and limestone, it gathers minerals that give it a so-called “hard” quality. Many times, high levels of calcium and magnesium can leave scale deposits on dishes and other surfaces around the home. They also cause soap scum and can form potentially destructive buildup in pipes, electric heating elements and boilers. To combat this, many people turn to salt-based water softeners, which remove the majority of minerals and “soften” water.

Salt-based water softeners function on the principle of ion replacement or ion exchange. Ions are electrically-charged atoms that can gain or lose electrons in water. As sodium ions leave the ion-exchange resin and enter the water, magnesium and calcium ions in hard water bind to the resin. Thus, Magnesium (Mg2+) and Calcium (Ca2+) ions in hard water are replaced by sodium ions (Na+). Once the calcium and magnesium ions fully replace all the sodium in the resin, more salt (sodium chloride) must be added to the ion exchange system to keep the water softener functioning adequately. 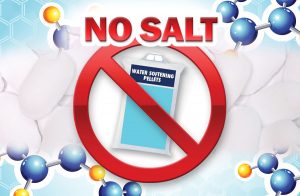 Because they add sodium to tap water, traditional salt-based water softeners could be problematic for people with high blood pressure. At the same time, these devices have a serious impact on the environment, which has prompted some communities to ban them. In addition to wasting about 150 gallons a week or 7,800 gallons every year, salt-based water softeners discharge salt brine, which is harmful to local lakes, streams, and soil. In response, numerous California communities recently passed measures banning these devices, with some performing home inspections to ensure that residents are making the switch to more efficient, environmentally-friendly softening devices.

Unlike salt-based water softeners, salt-free devices are able to effectively neutralize the destructive effects of hard water without any potentially harmful consequences to human health or the environment. In fact, devices such as Enviro's NaturSoft Salt-Free Water Softener waste no water and eject no harmful brine back into the water supply. These modern devices also provide big economic benefits, since they don’t use any electricity or require salt replacement packets.